It was the end of the second week of October, and the leaves were turning a glorious colour.  A small group of us met at the wonderful Saxon Church at Escomb, just beyond Bishop Auckland, for a splendid morning walk that took us into quite unfamiliar parts of Weardale.

Unfamiliar to most us, that is: but David and Janet who led the walk had clearly done plenty of preparation. They steered us clear of treacherous mud and threatening cattle; and according to the signs we seemed to be heading to some pretty unexpected places.

We enjoyed the sun when it fleetingly shone, and we were grateful that the drizzle we saw coming in our direction across the valley was very short-lived. The scenery where the views opened out over Weardale was exhilirating; and everywhere we recognised signs of an industrial past that is hard now to imagine.

Just this short distance from our homes in Durham City, we wondered what life might be like today in some of these smaller villages. There’s plenty of new substantial-looking housing, making quite a contrast with the ruined farm complete with “for sale” notice that we’d passed back up the hill. And it was good to see that buses were running – and seemed to be running to time.

Probably many of us are hardly aware of the variety of countryside that’s on our doorstep, and know very little about the rich history of County Durham. So we were glad that our route took us past the memorial garden celebrating the Bradford brothers who were born in Witton Park, and who both won VCs in World War 1. The statue by Ray Lonsdale, the sculptor best known for the Tommy memorial at Seaham, depicts a soldier and a miner – village friends greeting one another after the war’s end.

Our journey’s end was the Saxon Inn back at Escomb – giving us the opportunity to thank David and Janet for another very successful church walk.  Look out for the next one! 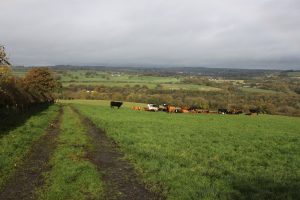 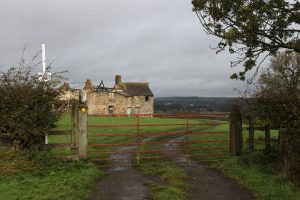 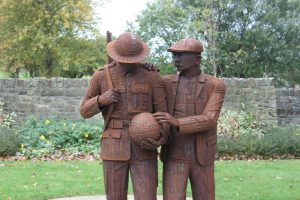 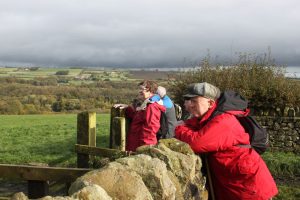 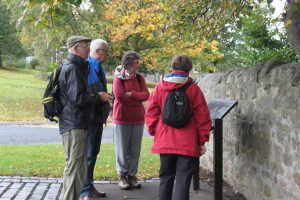 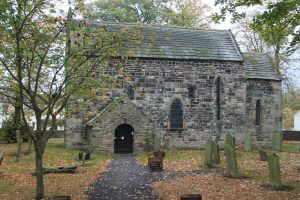