Christmas cards are being displayed in the church vestibule. We can each greet one another in the congregation in this way, and make a donation to Christian Aid in lieu of the cards we would otherwise have sent. 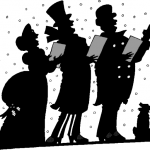 Waddington Street members joined with singers from several other Durham churches to sing carols in the Market Place on Saturday December 17th. For the first half hour they were supported by the Salvation Army band, after which they bravely continued unaccompanied for a further half hour. It was a very busy time in the city centre, and it was heartening to see how well received their efforts were – both through the smiles on people’s faces, and the money thrown into the Christian Aid Bucket.

The Sunday before Christmas

This year this was a whole week before Christmas, of course. Elders led a thoughtful and moving service which retold the Christmas story as the figures were added one by one to the nativity scene on the communion table.

After the service a splendid Christmas lunch was served in the church hall, with the proceeds going to the work of Médecins Sans Frontières in Burma.